It is Well: Reasons we are Thankful our Child with Down Syndrome Came FIRST

There are often times that Vincent and I discuss what our life would be like if Harrison, our son with Down Syndrome, had come last in the birth order of our family instead of first. He would have older siblings to look up to, to mimic after, and, maybe just maybe, they’d help corral him as he gleefully shouts, “Run awayyyy, run awayyy!” and takes off down the street (or in the airport or in our church or at the park or basically anywhere else we go) as fast as his little legs can carry him.

But here’s the truth: Harrison came FIRST in our unique family of five. It’s pointless for us to be envious as we look around at the many other families who have a child with Down syndrome being the middle child or the baby of the family.

Thus, we have created a list of 5 reasons why we are THANKFUL that Harrison is our firstborn. 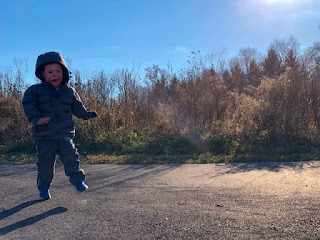 1. Our trust in God has grown exponentially. I'm not saying our trust in God wouldn't have grown whether we had a child with Down syndrome or whether we had a typical child first. What I AM saying is that we realized then and we realize now that there is nothing we can do but put our trust in God. It dawned on us quickly that we weren't in control when Harrison was born, when we received his diagnosis, each year of his life, each time we receive another diagnosis for him, and each time we grow our family. Let's be real: EACH DAY I realize I'm not in control! Just watch my stories on IG and you'll see the messes and chaos joy all these boys initiate.

2. He won’t be (as) spoiled. Note that I said “as spoiled.” While this certainly isn’t always true, there is a common theme that babies of the family are the most spoiled. Harrison came first, so he had to endure the difficult nursing newborn days of his two younger brothers and him not always being the center of attention. This created an environment where I wasn’t always available to give him one-on-one time. He looked at books or laid on the floor in anger as I nursed Brooks and did the same when I nursed William. I’m not saying that Harrison isn’t already a tiny bit spoiled; if you see the way he cocks his head and says “cookie,” it’s pretty hard to resist. All I'm saying is I know that if he was the baby of our particular family he would be straight-up spoiled and probably very overweight from his hypothetical older siblings giving him cookies.

3. The realization that our hope cannot be in medicine. After Harrison was born, so many things popped up as “wrong” with him. Even now in the fifth year of his life, he is receiving different diagnoses and going through various drugs and surgeries. Despite surgeries and the hope we have that a new drug or surgery will “fix” the issues Harrison has, we have to remind ourselves that we cannot put all our hope in medicine. Through my other kids, I’ve come to understand that sometimes Tylenol/Ibuprofen isn’t a cure-all; maybe they are fussy because they just want some extra cuddle time or are scared or are going through a growth spurt or all of these things all at once. Through Harrison, God has taught us to put our hope in Christ every day no matter what the outcome of a surgery or a drug.

4. It has reframed our expectations.  For obvious reasons, Harrison did not reach his milestones on the same timeframe typical children do. He didn't walk until right around 2, he's still and always will be working on his speech, he is just now mastering his pincer grasp, and I finally saw him climb up a ladder at the playground all by himself a few days ago. Harrison taught us to be more patient as we let him have fun and be a kid rather than obsessing over his milestones. Yes, therapies are VERY important for Harrison, and, yes, we do set certain expectations at home that we expect Harrison to abide by. However, Harrison has taught us to not worry about the exact day when he reaches a milestone but rather to rejoice in it when he does get there. Because of all of Harrison’s therapists, I knew quite a few gross motor and fine motor skills to be working on with Brooks and William. Though we were relaxed and let the other two boys explore the ground a LOT (aka tummy time), we are also more keen to which milestones should be met within certain months. For instance, we noticed Brooks wasn't talking much around 18 months and knew he should have been speaking more. He is now receiving speech therapy! It's not a big deal at all to us because we've seen firsthand how much therapies help. We know Brooks will start annunciating well in his own timeframe; yes, we will create an environment to help and encourage him but we aren't going to obsess over the fact that he's a little behind other kids his age in speech.

5. We’re less stressed. I should rephrase this as less stressed when under a lot pressure because there are days when we are down and defeated from our circumstances. One of the questions I receive the most when I’m out and about with all the boys is “How do you do it?” By the Grace of God. That’s how I do it. It’s amazing what you are capable of doing when you have no other choice. I’m not claiming that life isn’t hard or that it’s a cake walk raising a child with Down syndrome. Raising kids regardless of their ability is hard. But, because of Harrison and all that we have been through with him, it has made me less stressed when things go really haywire compared to the culture’s standards. As a friend beautifully wrote, "We're just meant to do the best we can in the moment, and then leave the rest up to Him. I'm learning to trust that- which might just be the greatest way I can show my love and faithfulness to a God who loves me, His child, as much as I love mine." Do you know the picture of the cartoon with the dog calmly sitting there drinking coffee saying, “It is fine” as fire and chaos surround him?  Vincent and I sometimes jokingly use that in our texts when we check in to see how each other's day is going in a house full of three boys.
However, this cartoon does shed some truth in how we should joyfully sing unto the Lord “It is well!” to whatever lot He has given to us and cast our anxieties to Him because He cares for us (1 Peter 5:7).