Why I Said "No" to Genetic Testing 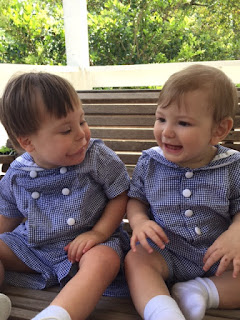 When I was pregnant with Brooks, Vincent and I received mixed reactions. Many people were excited for us, others thought we were crazy for having another so soon after Harrison, and some were shocked that we would even have another after Harrison because of his Down syndrome.
As any momma and/or soon-to-be momma knows, questions come pouring in from friends, family, acquaintances, and little old ladies at grocery stores. The most common question during my pregnancy with Brooks wasn't about his gender or what we were going to name him or how I was feeling about entering into the 'mommy of two kids life.' Yes, those questions were asked, but the most common question asked was, "Did you get genetic testing?"

Even when the question wasn't asked aloud, I could see people wondering it. They'd glance over at Harrison, look at my growing belly, look back at Harrison, open their mouths, then close their mouths. They'd think for a second, obviously trying to think of a different question, and then ask a surface-like question of whether I'd set up the nursery yet (no I hadn't). In my head, I'd scream, "Just ask the question! I know you want to know if I know that everything is 'normal' with this pregnancy."

When the bold did ask the question, I would happily say, "Nope." Of course, I'd then explain why Vincent and I chose not to do genetic testing.


1. It wouldn't change our course of management.
Apparently, in the medical world, there is a saying that goes "DOTDAM (Don't Order a Test if it Doesn't Alter Management)."
If we ordered a genetic test, it wouldn't change a thing. Our little Brooks would still be our little Brooks. Terminating the pregnancy was not and will never be an option. Harrison and Brooks were both fearfully and wonderfully made, knit together in my womb by God.

2. It costs money.
Anyone that knows my husband knows that he is . . . pragmatic. A prenatal genetic test, even with insurance, would cost money. Money that could be used for Brooks instead of for our peace of mind.

3. It wouldn't prepare us.
"I just want to know so I can fully prepare my mind for what's to come" is a common saying among pregnant moms who decide to get prenatal testing done.
Let me tell you, you will never be prepared. Genetic issue or no genetic issue, nursery complete or not complete, parenting books read or no books read, baby clothes washed or not washed, you will never be prepared enough to bring a child into this world.
All those 0-3 month clothes you had so freshly washed and so neatly folded might have to be set aside because your baby came early and needs preemie clothing. OR your baby decides to come late and is huge, so you send your husband to dig around the nursery to find the 3-6 month clothes.
Those bottles you bought and sanitized might not work because this particular baby doesn't like that kind. Or he, like Brooks, refuses every kind of bottle and prefers only mommy. So much fun.
Your sweet newborn might have a genetic condition. Knowing these conditions before your baby's birth might allow you to join support groups in advance (my local DS group is amazing!) or read books on the subject, but none of these will fully prepare you for what's to come. Those books, online forums, and support groups will still be there after your child's birth, by the way.
Again, each child is fearfully and wonderfully made, thus each child is extremely unique. This results in the whole mantra of "what works for one child may not work for the other."
"If there is an issue, I can get over the grieving process early and be able to be joyful instead of sad during his birth day" is yet another common saying among pregnant mommas who choose prenatal testing. Grief is not something you can put a timeline on. Among the many joyful days we have in the Marsh household, I still get overwhelmed at times with grief over little Harrison's DS diagnosis or his lymphatic malformation issues. Read this absolutely beautiful post on Grief in the Freezer from a dear friend.

For us, personally,  it was the greatest thing to not know ahead of time about Harrison's diagnosis. Yes, it was painful to wait those few days after his birth to find out the results of that Trisomy 21 test, but I'm so thankful that we decided to say "No thank you" to the doctors when we were sent over to get a high risk ultrasound done after our 20 week appointment and they encouraged us to get testing done. I know myself and I would have constantly wondered and researched and researched and wondered about what Harrison was going to be like if I had known in advance of his diagnosis. Instead, I went through the pregnancy joyfully.
*Side note- I am all for 20 week ultrasounds! They can be really helpful in identifying life-threatening defects that may need to be corrected as soon as the baby is born or even during pregnancy. It was at my 20 week ultrasound (during my pregnancy with Harrison) where they also noticed I had a low-lying placenta and were extra cautious during Harrison's birth.*

As you now know, we said "No thank you" again to the doctors when we were pregnant with Brooks. My OB/GYN was amazing about it. He asked if I was planning on getting genetic testing once and that was it. He didn't push for it any further and actually agreed with me on saying no! I sadly hear stories of other moms whose doctors are very definitive and pushy about getting testing done even when they are at very little risk.

When Brooks' birth day arrived, I was anxious for the nurse to put him in my arms. Although I had a peace throughout my entire pregnancy,  I still examined Brooks up and down for DS markers. None of them were present. What was present in that birthing room was our second son, Harrison's little brother, my parents' sixth grandchild, Vincent's parents' second grandchild, my nieces' and nephews' baby cousin, my grandparents' I-don't-know-how-manyth great grandchild, God's good and perfect gift. 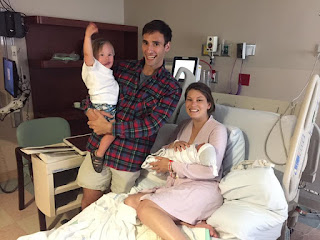 ** If you said "yes" to prenatal genetic testing during your pregnancy, please please don't feel bad about it! Everyone has different views on this subject, and this is just my personal opinion on it since many are curious as to why Vincent and I decided against it.**