*This post may contain affiliate links, which means I may receive a commission if you click a link and purchase something I have recommended.* 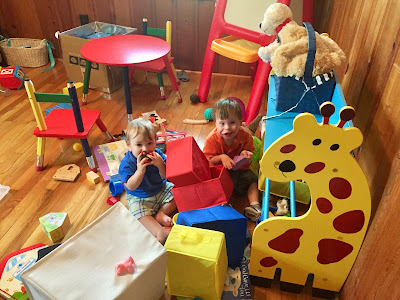 I should just end the post with that. But, there are several people who have asked me to start writing in my blog again, so I will continue....

As some of you know, shortly after Brooks was born, Vincent was away for a good two months due to medical school away rotations. He got to come home for two weeks in between his rotations, and it was such a tease! (Needless to say, the boys and I were hanging out at my parents' house quite a bit. Who can resist my mom's delicious cooking?? In fact, every time we pull up to their house now, Harrison starts signing "cookie" and "dog"and gets extremely excited.)

Adventure #1:
My parents were so helpful during that tough time of Vincent being away. However, there was one day when they both were out and about and I was alone with the kiddos. Brooks was about 7 weeks old. Harrison, 2 years old, needed to get outside, and I had an awesome tandem double stroller (the kind where one kid is way up front and the other is by the stroller handle near you). As we walked, I noticed that Harrison was being unusually quiet. I continued walking, secretly enjoying the silence, when I heard a man yell "Hey!!"

Not sure if he was talking to me, I continued walking as the man started running towards me.
That's when I realized I was running over my son.

Harrison had unbuckled himself, pushed himself under the stroller bar, and was under the stroller! I quickly stopped, pulled Harrison out from underneath, and cuddled him for a bit as he recovered from the incident. (Although as a mom with a kid with Down syndrome, I was kind of impressed that he had managed to unbuckle himself.)

I decided that we had walked enough. But, the adventure didn't stop there....

Brooks was sleeping in his car seat when we got back, so, since Harrison likes to grab his face, I placed him on the couch away from him (a little foreshadowing??). I began to make Harrison's lunch and suddenly heard a loud BANG. I sprinted to the sound and was horrified to see that Harrison had KNOCKED Brooks to the floor. I pulled Harrison away, grabbed Brooks out of the car seat, and called Vincent to see what I should do. Brooks had been buckled in, and Vincent assured me that those car seats are made to withstand a lot more impact and force than a short fall from a couch.

As I held Brooks and fed Harrison lunch, I cried. And I prayed. And I cried a little more. I felt like a terrible mother; I had ran over my son with a stroller and let my other son fall from a couch all within one short hour. Yes, mothers, this is a post to make you feel a lot better about your parenting fails.

Shortly after that incident, I decided to figure out what I needed to change parenting-wise. I sold my tandem stroller

(for those that can trust their kids to not escape, it is a great stroller) on a mom swap group and bought a side-by-side stroller which I LOVE. If you are on the market for a great double stroller that's light, easy to push, and so much fun to fold up, this one

is great!I can now actually see Harrison and I haven't run over him again. 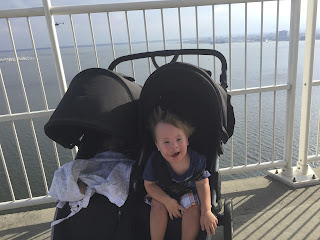 Oh, and I stopped putting Brooks on the couch. It was just too tempting for Harrison.

That adventure made me think a lot about parenting. About how, when something goes wrong, we quickly jump up and figure out how to fix the issue. We ask our own parents, we consult other parents, we do some intense research (do mommy forums and blogs count as research?), we check in on our Facebook friends, we even make time to read parenting books.

There is nothing wrong about seeking others' counsel on parenting, but many times we forget to take a step back and consult the most important Counselor.

Even though God's Word may not give specifics on the best double stroller to buy or what type of crib mattress is safest for a newborn (I don't think a manger with straw is very safe), His Word does instruct us to "train a child in the way he should go; even when he is old he will not depart from it."-Proverbs 22:6 and to "put on then, as God's chosen ones, holy and beloved, compassionate hearts, kindness, humility, meekness, and patience"- Colossians 3:12.


Stay tuned for more of our fun Marsh Boy Adventures!