"Mollie! What's he signing? I can't figure it out..." Vincent shouts out from the other room. I run in from the kitchen curious to see the new sign Harrison has acquired.

"Yea!" Harrison squeals. He gets so excited when we figure out what he's signing.

Watching Harrison add more and more signs to his vocabulary has been precious to see. I literally can't keep up with his growing vocabulary... what an awesome problem to have! Each day, I research (let's be real... I ask Siri because my hands are full with two little ones most of the time) what the signs are for different objects or animals are that Harrison shows an interest in and he and I learn them while Brooks studies us.

And then there are many moments where I have no idea what Harrison is signing because he watched a Signing Time video while I was nursing Brooks or cooking dinner.

96 signs. That's how many signs I counted up a few weeks that I know for sure Harrison knows. This doesn't include signs that he knows that I don't know! (Brooks is just 2 and counting... he knows "cat" and "more." No idea why it's "cat" instead of "milk" or "eat" or even "ball" especially since we no longer even have a cat.) 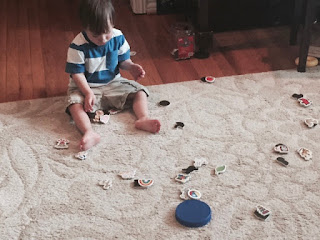 Sign language has been such a useful tool for our family. It has allowed Harrison to communicate with us since his verbal language skills are a little behind and it has given him a much needed confidence boost. His favorite activity is to go to his little table in his room, sign "school," and show off his signs by pulling out magnets, flash cards, or picture books and signing what he knows.

So, next time you see our sweet little Harrison, ask him what a dog, cat, cookie, bear, or tree is and he will excitedly show you.

*Warning- Maybe avoid asking him what the sign for "cookie" is. Because then he's going to follow you around signing"cookie" repeatedly over and over until you give him one. *