Rejoicing in the Successes of Others

Why is it difficult for us to truly rejoice in the success of another?

It saddens me that, in today's society, when someone says they are a doctor, lawyer, CEO, etc. they get suddenly get treated a little differently. It may be subtle, it may be obvious, or, hopefully, not at all. A person who works incredibly hard to be where they are gets suddenly looked down upon or treated differently because they are making more money.
It's gotten to the point where many are ashamed to say what they do or where they went to school. We were at a wedding a few months back where we were reunited with old friends. Everyone was saying what they did now, and Vincent very shyly and quietly said he was in medical school. Later, he said he felt awkward and "bad" about it. Thankfully, his old friends were in the category of not treating anyone differently based on their successes. But it was sad that Vincent had been "trained" by society that it's good to have success, but not good to have too much success.

If someone succeeds, we should rejoice! Whether it's getting married, getting a first job as...anything- first jobs are huge!, graduating medical school, having a child, buying a home, getting a "B" in a tough class, being a great singer, reading a book for the first time, or even becoming the President of the United States (well, it depends on who it is before that rejoicing takes place ;) ).


I will admit that rejoicing in the successes of others has been a struggle of mine this past year.

It was all good for the first few months of Harrison's life. He was actually right on track with other typical kids. He smiled on time, rolled over from side to side when he was supposed to, and reached for toys. Slowly, his little friends began to surpass him in milestones.


I have had to learn to rejoice in those milestones that other kids are reaching. I have had to get excited and ask the moms or dads what new thing their kid is up to now.

I've finally gotten to a point where I enjoy talking to other parents and finding out all the exciting adventures their kids are taking them on. If I see a kid feeding himself Cheerios, I smile instead of becoming envious (picking up small objects, like Cheerios, is a HUGE deal in this household). If I see a kid walking at 10 months, that's awesome! (I am actually OK with the whole 'average age for walking is 18-36 months for kids w/ DS' statistic.)

I've also learned to embrace Harrison's own successes. (By successes, I mean milestones... I don't want you to think that anyone is measured by their successes in life!) There are so many of them that I can't even begin to list them all! Read what he's been up to/ his exciting successes in upcoming blog posts.


"Rejoice always, pray without ceasing,  give thanks in all circumstances, for this is the will of God in Christ Jesus for you."1 Thessalonians 5:16-18 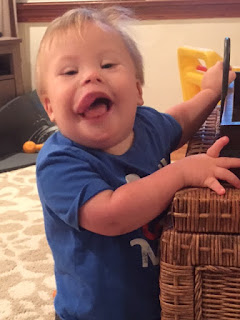